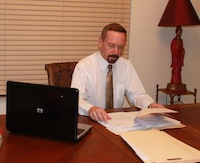 Based on his international FBI assignments, he is familiar with international extradition procedures worldwide and business crimes in the foreign arena, especially in Central/South America as well as the Caribbean region.  He has been a member of the Florida Bar since 1990 and is also admitted to practice law in New York, Colorado, Pennsylvania, Washington, D.C. and the U.S. District Courts in Puerto Rico, Florida, Texas and Colorado.

Originally from Colorado, Attorney Michael Youngs is a graduate of the University of Colorado where he earned a BA Degree in English. He also attended the University of Denver Law School where he graduated with a Juris Doctor (JD) Degree in 1975.  Mr. Youngs also speaks fluent Spanish, Portuguese and some French.