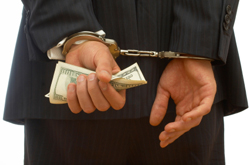 Public corruption charges can be brought against officials whether the person is employed at the municipal, county, state or federal government level.  Public corruption charges can ruin a person’s reputation and more importantly cost him or her their secure job and freedom.  When a public official is accused of corruption whether it be in the form of fraud, theft of government monies or bribery, their life changes radically and it becomes a question of whether such a public official can defend himself successfully against an avalanche of state or federal criminal charges.  Federal prosecutors pursue cases of public corruption which are investigated by the FBI in an aggressive manner in order to show the public that government officials,, more than any others, should be severely punished when violating the law.  They often become over zealous and accuse individuals who were on the periphery in any public corruption case in order to demonstrate that public officials must be honest in all endeavors no matter how minimally involved the accused may be in a public corruption investigation. The exception to such prosecutions is often seen when high level political figures are involved.  In such cases, prosecutors are often guided by functionaries at the highest levels of the U.S.  Department of Justice.

There are numerous law enforcement task forces in both the federal government and at the local level who are constantly investigating allegations of corruption against public officials.  Police officers have often been charged in corruption cases and should be aware that it is important that you need to contact an attorney who has dealt with public corruption cases in the past in order to obtain the best and most experienced lawyer.  Often times, when an attorney that has very little experience with federal prosecutions relating to public corruption is representing a police officer or city employee, the result can be devastating including a long federal prison sentence for the accused.  Public corruption charges against city or county employees can include fraud, theft, or bribery all of which carry extensive penalties of 15-20 years in prison plus a fine of $250,000 or more.  In most instances, relating to bribery, for example when the case involves bribery of a federal employee, a special federal official bribery statute is applied during a prosecution which can result in a prison sentence of up to 15 years.  Also, whether the case involves fraud, theft of government funds or bribery, additional charges are added by prosecutors through a federal grand jury relating to money laundering, tax evasion as well as conspiracy if others were involved in the crimes alleged by federal prosecutors.

State or city public officials who are accused of corruption should remember that charges of bribery may result even if no monies are received but only expensive gifts are given to the public official.  Such receipt of gifts by a public official is also a violation of federal law.  A recent prosecution which resulted in a conviction involved a large corporation competing in a bidding process for services at the city and county level. The corporate officials only offered so-called “gift incentives” which were received by public officials to provide the company with information regarding the bidding process involved in city and county contracts.

There have been a variety of federal public corruption charges brought against U.S. Military and government contracting firms in recent years relating to U.S. Military activities in the Middle East.  Several senior military officers have been charged with public corruption, generally, bribery and theft of government funds in recent months.  The International Control Corruption Task Force has been set up by the U.S. Government to investigate allegations of bribery or fraud committed by public employees especially in overseas operations due to the large number of Defense Department contracts involved in conducting military operations throughout the world.  If you have been accused of a crime relating to public corruption and are a military officer or enlisted person you need to obtain the services of an attorney who has experience in public corruption prosecutions.  The same is true if you are a U.S.  Government contractor accused of bribing a federal official or believe that you are under investigation by federal law enforcement, in particular, the FBI.

Whether you are a police officer, federal law enforcement officer, city official, civilian or military employee of the federal government, please feel free to contact the Law Offices of Youngs and Associates for a free consultation.  Remember that your reputation can be destroyed in an instant and your life can change forever if you are accused by federal prosecutors of theft of government property or money or for receiving a bribe in exchange for another receiving a benefit due to your position.  We encourage you to call our toll-free number and discuss your case with one of our attorneys who can provide you with the experience and guidance in facing overwhelming odds.  Federal law enforcement and federal prosecutors have the funding and support they need if you are targeted as a corrupt public official or are accused of bribing a government employee.  Also, judges sometimes actually give stiffer sentences to individuals with no prior criminal record simply because they are public officials.

If you are interviewed by the FBI or other law enforcement agencies or accused of public corruption you need to control your emotions and contact an attorney.  Please consider calling  the Law Offices of Youngs and Associates, P.A. immediately at (800) 516-0005.